Werewolf Haiku — Win a copy by sending us your most disgusting! 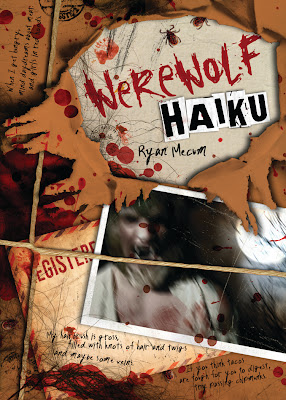 Last year I fell in love with Ryan Mecum's quirky little book featuring a story about vampires all done in haiku, Vampire Haiku

.  He's immortalized zombies in 5-7-5, as well.  Now, his latest release is WEREWOLF HAIKU

, and it's just as smart, fun, and enjoyably disgusting as the previous.  Here's a blurb about the book:

Werewolf Haiku is the heartbreaking story of a repressed man who slowly loses control of his inner beast after he's bitten by a werewolf. As he wrestles with the monster inside, he chronicles his feelings and urges in a haiku journal. The resulting poems are gross, strange, dark and hilarious. Together, they tell the story of a mailman who is in love with a woman on his route, but has never had the courage to tell her. As the beast comes out, wreaking havoc on his life, the man learns that his werewolf side might actually be able to help him in his quest for love.


And Mr. Mecum has offered to judge a haiku contest!  Winner receives a copy of WEREWOLF HAIKU.  Here's what he has to say:

It's time to show off your disgusting syllable counting skills and sharpen your teeth by writing us a werewolf themed haiku.  Five syllable first line, seven syllable second line, five syllable third line.  Make is gross.  If I can fill a book with over 350 of these nasty little poems, surely you can come up with one repulsive little keeper.  Here's a few samples from my book for inspiration:

Howling at the moon
never made much sense to me,
but it feels so good.
Constant gag reflex
thanks to my new long hair strands
growing in my mouth.
My hairbrush is gross,
filled with knots of hair and twigs
and maybe some veins.
Is it raspberry
or blood stains under my nails?
I'll guess raspberry.
I can’t remember
if wanting to lick people
is something that’s new.
I need a breath mint.
A smell worse than garlic breath -
my pancreas breath.
Blue moon leftovers.
Months with two full moon cycles
make me feel pudgy.

That's enough from me, now count those syllables out with your fingers and write us a disgusting poem!

Please send entries to vampchixmail@gmail.com, with werewolf haiku in the subject line.  Enter the contest through next Wednesday, October 6th.  Winner will be announced October 10th.

I'm not entering for the prizes because I'm already an internationally renowned haiku writer. What do you mean, I'm not? I thought I was. Okay, here is my werewolf haiku:

Transformation is
a bitch...I dated her and
woke naked in jail

Here's my on the fly attempt:

Sad, I know. No international rating for me. But at least I still have my evil genius status- bwah-ha-ha!!!

OMG! Shiloh Walker just posted a link to this: an actual werewolf transformation spell. And don't we all want one of those?
http://cgi.ebay.com/ws/eBayISAPI.dll?ViewItem&item=260670892993

Both were excellent haikus! Okay here goes my attempt...

I know. Lame but, I couldn't help myself.

Wait. What? Did you just say werewolf transformation spell? O_o

My eyes are blood red...

Enjoyed the Haikus there..

Here's my gross one LOL.>