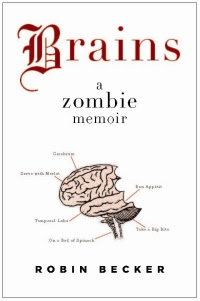 Meet Jack. Jack's a zombie. Jack loves his wife (who is not a zombie). He would never do anything to hurt her. But oh, do her brains smell good.

So begins the craziest story I've had the pleasure to read in a long time. First, I have to note: I don't like horror stories, never read them, and most especially avoid them at the theater. Zombies? They freak me out. So why did I read this story? EOS sent out a sampler of their books to reviewers, and as I was paging through the selections, I took one look at the title, and was ready to keep flipping pages. But for some odd reason I read the first page. Then the second page. And then, well, EOS had only provided the first three chapters, and by the time I'd flipped the last page, I was hungry for more. Brains! This book has a lot of brains, both literally and figuratively. It's a smart, gory, laugh-out-loud tale of sentient zombies on a quest to find salvation. Or do they just want brains?

I kept questioning my sanity for reading this book as I turned more and more pages, eagerly following the zombie hero on his quest, followed by a literal rag-tag (and decomposing) team of misfit zombies who for reasons unknown also possessed a bit of consciousness. What a clever idea to narrate a zombie story from a zombie's point of view! And also gross. Because yes, this is about zombies, and nothing about their kind is pretty or cute. (Accept maybe the baby Isaac. Until he starts swimming in guts at feeding time.) I laughed out loud dozens of times. I also cringed as many times at the horrific milieu of the story. The author doesn't glorify her zombies, she presents them as they are: brain feeders.

Like the zombies in the story whose bite marks begin to tingle as they sense live, human meat, so too did my deeply buried sick humor button tingle as I breezed through this story. Whoda thought I'd love something so strange, so darkly humorous? Highly recommended for zombie lovers, and even for those who would run screaming from the limping undead. Go on, take a chance. Get bitten!

Blurb: Forget contemporary American literature--former college professor Jack Barnes has a new passion: Brains. It’s in his nature…he’s a zombie. But he’s not your normal, vacant-eyed, undead idiot. No, Jack Barnes has something most other victims of the zombie apocalypse don’t have: sentience. In fact, he can even write. And the story he has to tell is a truly disturbing--yet strangely heartwarming--one.

Convinced he’ll bring about a peaceful coexistence between zombies and humans if he can demonstrate his unique condition to the man responsible for the zombie virus, Howard Stein, Barnes sets off on a grueling cross-country journey to meet his maker. Along the way he meets more like him, rotting brain-eaters who have retained some sort of cognitive ability, and soon forms a small army that will stop at nothing to reach their goal. There’s Guts, the agile, dread-locked boy who can run like the wind; Joan, the matronly nurse adept at re-attaching rotting appendages; Annie, the young girl with a fierce quick-draw; and Ros, who can actually speak coherent sentences. Together they make their way through an eerie new world of roving zombie hunters, empty McMansions, and clogged highways on a quest to attain what all men, women--and apparently zombies--yearn for: equality.